Karate: Not just an art, a way of life!

Thank you for choosing Bushin Kan Dojo for your martial arts training.

Classes for all levels (beginner, intermediate, or advanced) are offered morning &

evening for adults and children.

Uniforms (Gi) can be obtained through the front office.

help answer any questions you may have.

Training in the martial arts is a way of life that encompasses tradition, selfdiscipline,

physical fitness and a search for spiritual enlightenment.

May you seek your own personal fulfillment at Bushin Kan Dojo!

5. REQUIREMENTS FOR EACH LEVEL OF TESTING

Note: Bow first to the Dojo (express the desire to train).

Bow second to the head instructor (do so whether the

instructor is present or not). Execute a loud Kiai.

2. Bow to the highest-ranking Yudansha in the Dojo at that time.

3. All non-black belts bow to any Yudansha when they enter and

leave the Dojo. If no black belts are in the Dojo, the senior

student will announce the word “Kikotsuke”. When you hear this

command, all students are to be at an attention stance (feet

together/hands to sides) and then bow to his/her presence.

4. Osu to members before asking questions or saying anything, and

Osu after conversation is over.

5. Foul language, emotional outbursts or any kind of disrespectful

attitudes will not be tolerated.

6. Fighting outside the Dojo is forbidden except in life or death

7. Attitude and respect are not to be forgotten inside or outside the

While training at Bushin Kan Dojo:

I . You are expected to abide by all rules and regulations of the school and

II . You are never to dishonor this school, association, fellow students or

1. NO SMOKING IN THE DOJO OR ON PREMISES.

THIS APPLIES TO ANYONE ON THE PROPERTY.

2. Students are to remain on their feet at all times unless directed to sit by instructor and

keep conversation to a minimum.

3. Finger and toenails are to be kept trimmed short

4. Karate gi’s must be worn for training and kept clean. (Beginner students may wear

clothes that are comfortable, such as sweat pants). While training, be certain that your gi

are neat and presentable. Your belt (obi) should also be tied correctly and center the

5. No shoes in the training area.

6. No gum, food or drinks are to be brought into or consumed in the dojo. This applies to

7. While in the dojo, Keith Seal will be addressed as “Shihan” which means Master

8. Karate students will refrain from any activity that will bring discredit to the Dojo, its

9. During training sessions, learn by observing advanced students attitudes and

10. Advanced students are to assist beginners whenever possible.

11. No metal or other hard objects are to be worn on the body during training (rings,

12. If you are ill, please be considerate and not infect you fellow Dojo students.

I. There will be three main tests a year. These events will be held in

the months of January, May, and September. The exact date will

be posted well in advance. The requirements are clearly stated in

this manual and on the wall inside the dojo.

II. We are also going to be conducting intermediate tests throughout

the year using the black stripe system. These stripes represent the

Kyu level of a student within the particular belt color. (i.e.) A

III. Special clinics held yearly by the headquarters dojo will also be

used as an excellent form of testing. These sessions are, by far, a

very good experience for all who participate. You will have the

opportunity to exchange energy with people from all over the

United States. Most of all you will have the opportunity to

IV. Every individual will be pre-approved for testing prior to the

actual event. The testing fee will be applicable to all levels below

3rd Kyu brown. This fee is due in the front office two weeks in

advance of test date. Please be prompt. All of the information

will be posted on month in advance. Those who are not preapproved

will not be allowed to test. All dojo members, family

and friends are encouraged to attend the event.

Requirements for Each Level of Testing

(Black Stripes apply to everyone)

1st half of beginner from (Kihon Shodan)

execution of Kihon Shodan, from start to finish

Requirements for Each Level of Testing

For Students and Instructors

b. Kicking – front, side, round, back, crescent, knee, spin

b. Combat position – Sen no Sen and Go no Sen Strategy

a. Execution of Kata with group harmony

b. Execution of Kata with individual timing

a. Target precision and control

b. Three impact in one timing

a. Control and precision

All execution delivery must contain the following physio-mental derivatives:

Effectiveness and efficiency of defense tactics

2. Focus to the target (smallest point in the moving line)

3. Speed (breathing and motion as one entity)

7. Full alertness (aware of all phenomena)

8. Calm resolution and control of all fear (trust in your destiny)

10. Remaining mind (control of all inner-outer energy and calm clarity in all phenomena,

STUDENTS PARTICIPATING IN ANY FORM OF SPARRING ARE

REQUIRED TO WEAR PROTECTIVE GEAR. THIS SHALL INCLUDE

EACH STUDENT SHALL BE RESPONSIBLE FOR HIS OR HER OWN

GEAR, CARE OF THE GEAR, AND TRANSPORTING THE GEAR TO AND

FROM THE DOJO FOR SCHEDULED SPARRING CLASSES.

ALL WEAPONS ARE TO BE TREATED WITH UTMOST CARE AND

RESPECT AT ALL TIMES. WEAPONS USED IN PRACTICE OUTSIDE

THE DOJO SHALL BE TREATED WITH THE SAME CARE AND

RESPECT AS SHOWN INSIDE THE DOJO. STUDENTS SHALL BE

RESPONSIBLE FOR TRANSPORTING THEIR OWN WEAPONS TO

AND FROM THE DOJO FOR SCHEDULED KOBUDO CLASSES

EXPECTED TO HAVE A BO TO PARTICIPATE IN KOBUDO

BELT LEVEL ARE EXPECT TO HAVE A BO & SAI TO

3. STUDENTS OF 3RD KYU BROWN BELT LEVEL ARE EXPECTED TO

HAVE BO, SAI, & KAMA TO PARTICIPATE IN KOBUDO

4. STUDENTS OF 2ND KYU BROWN BELT LEVEL ARE EXPECTED TO

5. STUDENTS OF 1ST KYU BROWN BELT LEVEL ARE EXPECTED TO

HAVE BO, SAI, KAMA, & BUKTO TO PARTICIPATE IN KOBUDO

Karate means, literally, the art of the open (or empty) hand. It probably originated in

India, as did other martial arts, and was carried to China by practitioners of Zen

Buddhism around A.D. 500. Karate was introduced in Japan by Okinawans during the

1800’s. It became popular in the United States after the Korean War.

Association in Japan) HISTORY AND OBJECTIVES

support of the people of Japan. Where, upon all Japanese martial arts schools were

association. That is to emphasize the way of courtesy and respect, while cultivating the

mind, forging the body, and polishing the skills through the spiritual disciplines of the

Since the time of inception, with the efforts of many dedicated and disciplined

instructors and leaders of our association, we have contributed to the betterment of

society by educating and developing good citizenry. However, the association was

Commander of Allied Powers) and the end of the Pacific War defeat.

818 A.D. – May 5th, by the order of Emperor Saga, an archery ceremony on horseback was

conducted in the Martial Arts Hall situated in the Heian Shrine. This Martial

founded in conjunction with the 1200th year memorial of the Heian Shrine.

1930 – According to National Government records, there were two million one

holders) and there were two hundred fifteen thousand (215,000) expert extraordinary

members. All representatives of Martial Arts disciplines were instituted

under this society’s jurisdiction. Ranking and standardized formal requirements

1946 – By the order of G.H.Q. of Supreme Commander of Allied Powers, the society

1953 – August. Present Dai Nippon Butoku-Kai was re-established under the new

Hirohito, became Chairman of the society.

4. OBJECTIVES OF THE SOCIETY OF DAI NIPPON BUTOKU-KAI

Martial Arts in such a way that systematization of classical art forms, knowledge and

Japan. The society intends to contribute to the overall effort of developing a sound

educational base through research and publication of classical martial arts. The society

Sensei Hiroyuki Tesshin Hamada of Norfolk, Virginia is the Chairman for the Virginia

U.S.A. Dai Nippon Butoku Kai Association. He also is the Director-General of the

a 24th generation Samurai from Osaka, Japan. He also teaches a psychology course in

The Bushin Kan Dojo was founded in August, 1989 by Keith Seal. Keith began his

martial arts training in 1983 as a freshman at Old Dominion University. Now a seven’sdegree

Hamada. Keith is a member of Dai Nippon Butoku Kai Association and has made

several training tours through Japan and Okinawa. The Japanese Martial Arts style you

are studying is called “Chishin Ryu Heiho”. While training under the auspices of the

Bushin Kan Dojo Karate Club, you are to abide by its rules and regulations in all matters

pertaining to the practice of karate.

The Bushin Kan Dojo emblem and its meaning is as follows:

The Bushin Kan Dojo emblem concept was derived while I was on tour in Okinawa,

Japan. The dunes represent Jockey’s Ridge with sun rising or setting. The Kanji is

Budo (which means martial arts or martial virtues). The animals are a snake (Habu) and

The Habu, a “highly” poisonous snake, and the mongoose were pitted against each

other. Unfortunately for the Habu, 99% of the time the mongoose wins. The

mongoose’s strategy is very simple; it exhibits no hesitation and no fear when given the

opportunity to confront the Habu.

From a spiritual standpoint no matter whether the sun is setting or rising, there is always

a task to be confronted and dealt with in this matter. Through training one can develop

clarity of their purpose and move forward with confidence.

Snap form of any kick Ke-age

Thrust form of any kick Ke-komi

Jump form of any kick Tobi

NOTE: Many of these formal expressions/commands are used at Sensei

Face the elders and senior students

Face the audience or face front!

KATA NAMES AND THEIR MEANINGS

Naihoshin Sho Horse riding (from the most used stand in this

Bassai Sho To penetrate a fortress

Jion From the Jion-Ji Buddhist temple

Kusanku Sho To look to the sky (from the first moves)

Kanku Dai Kanku is also the name of a Chinese Military

Chinto Crane on a rock (also the name of a Chinese

Sanchin Posture of the mountain

Unsu Hands in the clouds

One who practices Martial Arts Budoka

(*The expression of the willingness to train yourself with others) 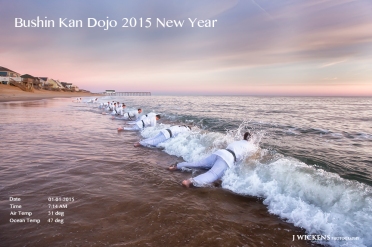 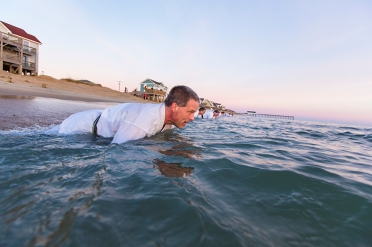 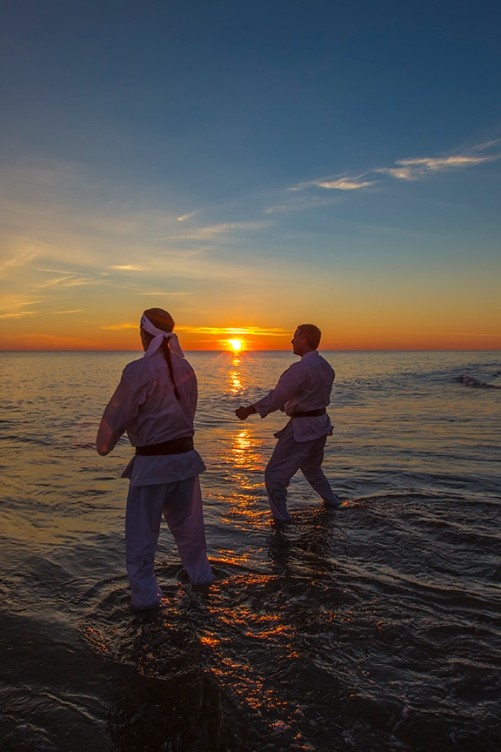 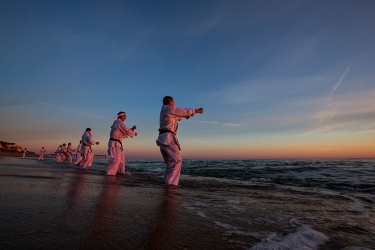 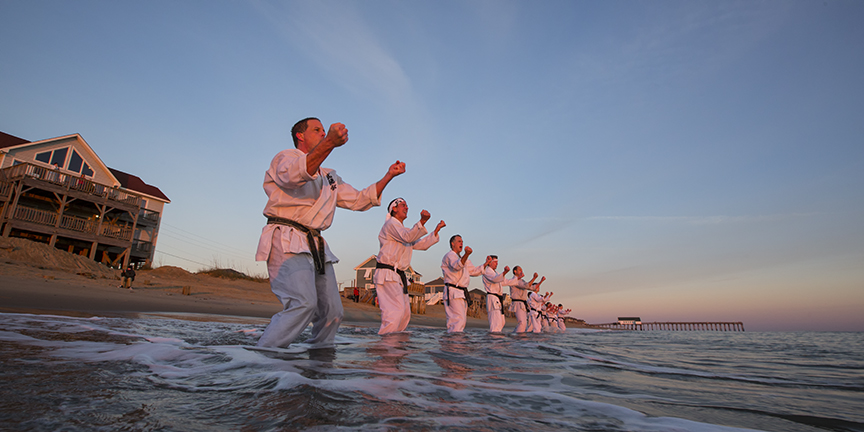